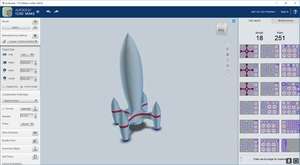 A review of Autodesk 123D Make by Tina de Pierre

Autodesk 123D Make is an interesting 3D design tool probably created as a response to free programs like Google Sketchup and the libe which converts 3D models into real-world objects which can potentially be created with a 3D printer.

To use Autodesk 123D Make, you should load the model into the program and choose the type of construction you would like to create the object with. You can import designs from other programs such as Google Sketchup or 3DS Max.

The problem with Autodesk 123D Make is its lack of innovative or concise menus which makes it difficult to get anything really done in an efficient manner. Although it does allow you to create some interesting real-life objects from a variety of different materials.

This download is licensed as freeware for the Windows (32-bit and 64-bit) operating system on a laptop or desktop PC from 3d design without restrictions. Autodesk 123D Make 1.6.0 is available to all software users as a free download for Windows 10 PCs but also without a hitch on Windows 7 and Windows 8.

Compatibility with this creator designer software may vary, but will generally run fine under Microsoft Windows 10, Windows 8, Windows 8.1, Windows 7, Windows Vista and Windows XP on either a 32-bit or 64-bit setup. A separate x64 version of Autodesk 123D Make may be available from Autodesk.